Big day today, so I didn’t walk. But for fun, found a great cooking show on BYUTV which you can actually watch on the internet. The good thing is that this chef uses a lot of grains and beans, which have long shelf lives, so you can incorporate your food storage with these recipes.

I don’t have much to say about this subject, other than I think I should probably work on some good recipes in the event that the EPA gets its way.

I just know that cold food gets old pretty quick. There is always, of course, fire for cooking. But when the electricity becomes too prohibitive to pay for, then wood will become scarce. Fun times ahead!

So…”Dale” and “Bob” left to go to a church activity last night. They arrived home a full hour and a half before they were due, exclaiming loudly what a great activity it had been. Clearly, they were lying to me. They thrust a Frutista Freeze in my hand declaring it a peace offering. It was 1/4 of the way full.

I got the dirt, and they freely confessed to bailing on the church activity by lying to the religious leader as they walked out the door. Makes Mama so proud. (she said drily.)

Later that night, they again professed how the Frutista Freeze should have expunged all negative consequences for them. I told them, “That wasn’t a peace offering; it was leftovers!” (They don’t know that I drank it anyway when noone was looking.)

Then the whole truth came out. They realized as they pulled into the drive at home that Mom was going to question their presence and their side trip to T-Bell. Thinking quickly, they poured the remainders of their Freezes into one cup to give to Mom. She’ll never notice that it’s mostly gone.

I had to laugh at the mental image their explanation evoked. Two squirrely boys snickering and foregoing that last luscious swig of strawberry goodness to try and boondoggle their mom into forgiveness. Maybe next time they’ll leave more and I’ll think about it.

What on earth does the one thing have to do with the other? Um…nothing.

I like to salt my cantaloup. I like peanut butter and bologna sandwiches. DH likes to dip his pizza rolls in applesauce, or Doritos in yogurt. What are the strange food combinations that you indulge in? “Bob” likes to dip his graham crackers in water so they get really mushy before he eats it. “Tori” puts everything in her mouth.

Now on to Coal Energy.

Sometime this year, the EPA is going to try and implement a new regulation (so cool how the EPA’s reason for existence is to regulate laws it creates. Brilliant.) that prohibits coal mines from mining UNDER (significantly *under*, as in 800 feet) ditches that have water in them for part of the year. It’s called the Stream Buffer Zone, or something like that. Never mind that mining 800 feet underground doesn’t actually impact the environment above it, the streams or ditches etc. It’s the best way to mine coal. Well, you say, COAL is DIRTY and FILTHY and pollutes the air! Okay, show me some photographs of places where coal smoke is smogging up the air in the United States. Come on, surely you can find one. No? Oh that’s right, the American Coalition for Clean Coal Electricity has spent 100 Billion (I was going to put the zeros in when I realized I don’t know how many zeros are in a billion.) dollars on investing in cleaner practices over the past twenty years. If the EPA successfully implements this Stream Buffer regulation, it will Bankrupt the coal mines. You’re thinking, well, COAL is so stinky and dirty, that’s probably for the best. Really? Hmm? Did you know that 52% of the electricity produced in the United States is from COAL-FIRED ELECTRICITY? Why not practice going halfsies on the electricity that you use right now. Will that change the quality of your life? Maybe just a little? Let’s just imagine for a moment that the EPA successfully bankrupts coal mines. Never mind the scores and scores and scores of jobs that will be lost. Currently, the cost of electricity created through coal fuel is .04 a kilowatt hour nationally, compared to .22 cents a kilowatt hour that Obama wants it to cost (by replacing it with solar and wind energy). Well, you say, we’ll just replace COAL energy with solar and wind energy! It will be paradisaical! Okay, well, the nation doesn’t actually have the solar and wind plants to replace the usage that America currently enjoys. So we’re talking brown-outs and blackouts. No big deal? Maybe not for you. That’s a freaking honking big deal to me and my family. My kids are rabid without electricity. But moving on…

Let’s just say that the EPA is successful in implementing this regulation with regard to people on fixed incomes. Consider the Baby Boomer generation who is approaching a fixed income on average of 31,408 $ a year. Currently, the percentage of their income going to energy is 21%. As a result of bankrupting coal mines, that percentage would go up to 78% (for people of 10,000$ a year income). And liberals LOVE to say how conservatives are always trying to get grandma to eat dog food. But I digress.

Anyone watch the Hunger Games? Notice how the district that produced coal didn’t get to use the electricity it produced? Notice how the people were starving and hard-worked and miserable? Notice the high-speed train that took the tributes to the beautiful Capital of Panem? I don’t know if Suzanne Collins knew what she was doing, but I found the movie to be darn right prophetic if our current administration gets its way. It’s time for the people to get up off the office chair, get off facebook, and get involved in the government. Our quality of life is about to be drastically changed, FUNDAMENTALLY TRANSFORMED, in fact, in Obama’s own words.

How about this for unusual food combinations: bread and water only. Out.

Yes, I walked, thanks for asking. On to food:

“Bob” wanted to fix pretzels yesterday, and the recipe called for enough flour that I figured it could be our evening meal. DH prepared two pints of beautiful red strawberries and I threw a bag of salad on the table as an afterthought. Tostitos Medium heat cheese sauce and mustard were pretzel topping choices. The pretzels turned out GREAT. We boiled them first, then baked them until they were golden brown. I thought we might all be hungry still, but frankly, we all stuffed ourselves silly, and there was a little pretzel left over too. And we didn’t even touch the salad. It was a fun dinner. If you’re so inclined, and have a few hours to prepare, find a good pretzel recipe online and try it.

Even though I didn’t blog about it, I did workout on both Thursday and Friday. On to more exciting news:

Amazon Direct Publishing lets any amateur writer skip the whole publishing house folderol and get straight to the selling part. If you’re feeling generous, buy and read these two short stories. They’re actually really good stories, but completely unrelated to each other.

Out until next week!

Walked a little longer today because I was watching GBTV. Glenn Beck had a panel of people who were familiar with Communist regimes…some of them barely escaped with their lives. What does Communism have to do with my dinky treadmill or my blog title…What’s4dinner? Well…let’s talk about food rationing. As soon as the government decides that it knows better how to distribute food, grow food and make food, then food production goes down. I heard a guy talk about receiving his card from the government that allowed his family of four to buy 800 grams of sausage for a month. Then they would take their card to the stores and stand in line to buy their food. I had to look up grams to pounds…his family got 1.76 lbs of sausage for a month! Wow! Lucky dogs! Speaking of dogs, I heard a prominent radio talk show host mention in passing that in Communist and Socialist countries, people eat dogs. Chew on that for a while.

So I mentioned that the other night I dreamed about cupcakes, right? Loads of cupcakes, they all looked delicious. I had a cherry vanilla flavored one. When I woke up, I swallowed the bitter pill that it was just a dream.

Ever hear of Living Social? Of course you have! There was a voucher for a local cupcake joint; it was only 5 bucks for 10$ worth of cake. Took a little jaunt there today, and boy oh boy. Dreams do come true. 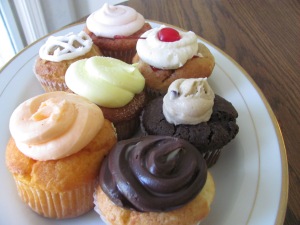 If you’re reading a good enough book, you can walk fifteen minutes without even realizing it. Just finished “Previous Engagement” by Stephanie Haddad, and it was delightful. When my timer went off, I couldn’t believe fifteen minutes had gone by so effortlessly. I don’t always want to read and walk at the same time, but it was a fun diversion today. Remind me to tell you about the night I dreamed of cupcakes…ALL NIGHT LONG.

Yes, I took a pathetic week off to what end? I don’t know. It was pure laziness. So I am back, and oh my aching (fill in the blank with whatever you prefer).

I stopped drinking green smoothies when morning sickness hit, but that is over now, so I am going to return to my green roots. Carry on.